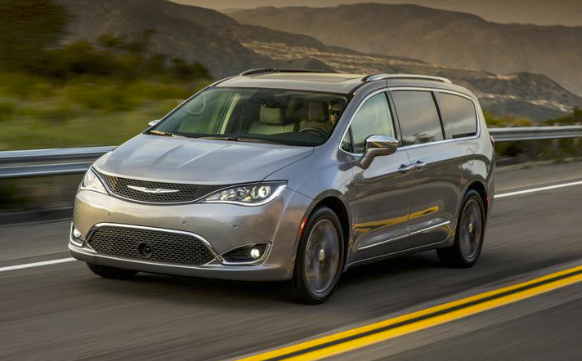 When having a family, there are a number of items one must account for on the proverbial check list. Among the most important is having a dependable vehicle to ride in. There’s no price on the safety of one’s entire family. Traditionally speaking, minivans have been popular choices for those with multiple children. Chrysler in particular has been a company long regarded as a leader within the minivan industry. In fact, Chrysler most recently came out with the 2019 Pacifica — the most awarded minivan for three years in a row. When diving deeper into the vehicle, one will quickly realize why it’s so highly regarded.

This seven-seat car is rather unique. Most minivans simply putter around on streets without much in the way of acceleration or power. The ’19 Pacifica is nothing of the sort. It comes equipped with a 3.6-Liter Pentastar V-6 engine. It offers a whopping 287 HP, 262 lb.-ft. of torque, and also has best-in-class towing capability. From a mileage standpoint, the Pacifica is more than respectable (18-19 miles-per-gallon in city driving, and 28 miles-per-gallon on the highway).

Chrysler is big on promoting the interior of the Pacifica. The cabin has been revamped to not only become more comfortable and spacious, but to also display real illustrations of class and sophistication. The presence of Premium Nappa leather trim is an example of this premise.

Another intriguing facet within the car’s interior is the Stow ‘n Go Seating feature. Normally, people do struggle with the rearranging of seats — whether one wants to put them down or move them. The Pacifica makes this process immensely easy. By simply pushing on a small button located on the inside of the passenger seat door, the chair directly behind the driver’s seat will fold down in a moment’s notice. This is perfect for those who tend to transport longer, bigger items in the back of their vehicle. Both the second and third row seats can be tucked away neatly within seconds.

From a technological standpoint, Chrysler offers Uconnect. The interface is quite easy to use. Duly, Pacifica models come with the likes of 4G LTE, Apple CarPlay, Wi-Fi, and Android Auto. There are even voice control mechanisms which enable the driver to have texts messages read out loud to them. Hands-free phone calls can also occur in this scenario.

When it comes to aesthetics, fuel economy and comfort, few minivans compare to the 2019 Chrysler Pacifica.